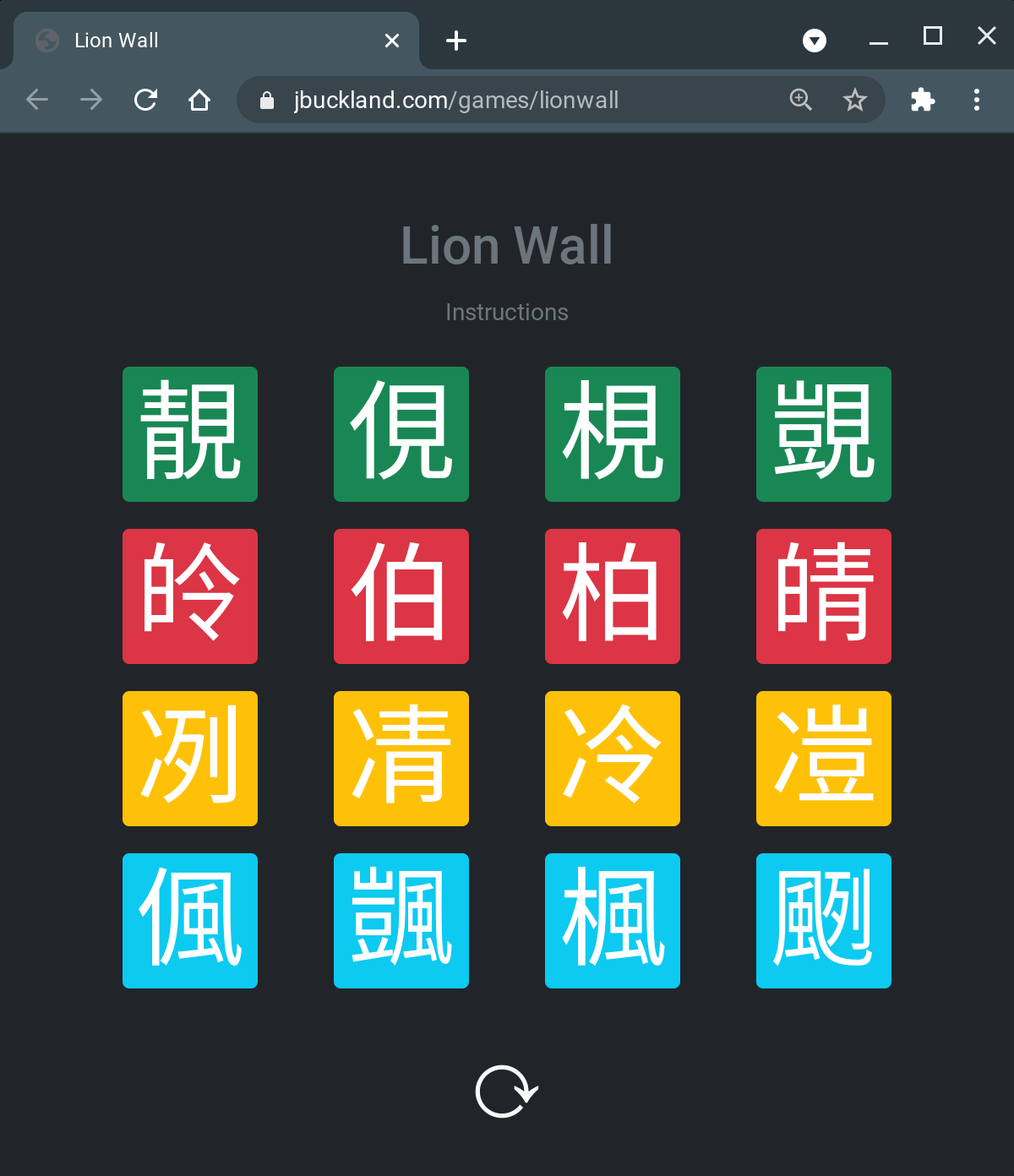 Lion Wall is an online game inspired by Only Connect, a British TV quiz show. In the third round of Only Connect, contestants are faced with a four-by-four grid of cards. These cards can be grouped into four sets of four, where group is connected by some common thread.

An example “Connecting Wall” puzzle. The answer requires dividing the items into “Terms for zero”, “Poker terms”, “Flying ___” and “Things made of rubber”.

To make the puzzle harder, some of the cards seem to belong to more than one category. In the example above, the category “Poker terms” applies to “Deuce”, “Bullet”, “Crab”, and “Cowboy”.

This category also seems as though it ought to apply to “Ace”, but “Ace” actually belongs to the category “Flying ___”.

On Only Connect, these cards are called red herrings.

I first wanted to lift this game out of the domain of English-language trivia.

If we wanted to map this generalized game back to an English-language trivia game, the real categories [1, 2, 3, 4] might become [“Terms for zero”, “Poker terms”, “Flying ___”, “Things made of rubber”], and the red herring categories might become more loosely-defined categories such as:

Many CJK characters consist of two subcomponents: if we map each of the categories 0-9 to a component, we can usually find characters which contain only those two components.

Before writing an automated solution, I stepped through the process of assembling a valid puzzle by hand. I picked ten common radicals and mapped them to the numbers 0-9:

Then, for each card in the generalized grid above, I tried to find a character which matched:

This got me a valid puzzle:

Similar to AutoCJK, I used the phenomenal resource IDS.TXT as a backing dataset. I reused the decomposition utilities from AutoCJK which know how to read/parse IDS.TXT. In short, running decomposer.Decomposer() returns a networkx digraph such that 子 and 宀 are ancestors of 字, and vice versa for descendants.

Then I wrote this script to generate valid puzzles.

Running this script generates a valid, unshuffled puzzle such as 窠窒岤空洷溄江沚食仚仝企踉踝跮趾.

Then I wrote a webpage which could consume these puzzles and display them in an interactive format. You can visit https://jbuckland.com/games/lionwall.html to play the game or you can view the source of the webpage to see how it works.

I wanted cards to animate (flip over, fade out, wait, reappear at the top of the page), but I didn’t want the UI to be interactive during those times. So I wrote a semaphore to ensure that the UI could not be changed while animations or timeouts were ongoing. My solution was a global counter semaphore and two methods:

This let me chain sleep callbacks for running spaced-out animations:

But also react to keystrokes in a blocking way:

I generated ~100 games for Lion Wall but I ought to go back and generate more. I could also make this game more like the Only Connect version, with a timer, limited guesses, and extra points for specifying the connecting themes.